7 things for April 1 — The long march

7 things for April 1 — The long march 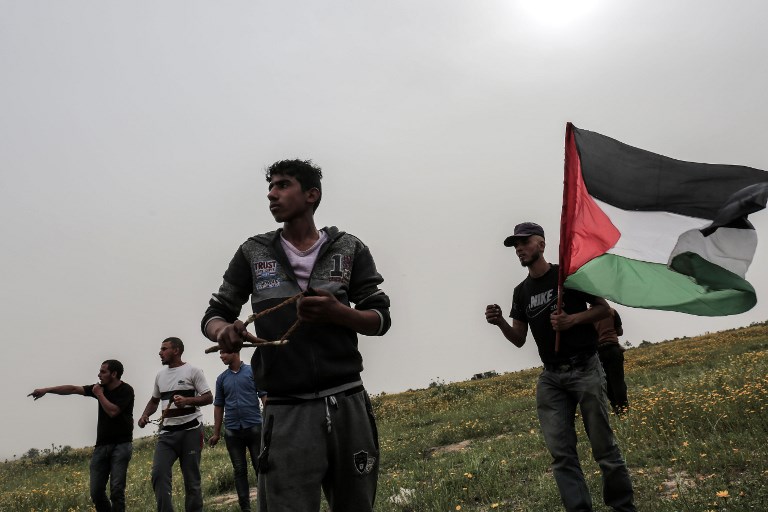 Israel is blamed by the international community for the deadlock of the peace process with the Palestinians due to its settlement expansion policy on Palestinian occupied territories.

The European Union has called for probe into killing of sixteen Palestinians by Israeli forces during protests in Gaza, reported Radio Pakistan.

Gaza has been under blockade by Israel for more than a decade, since Hamas took control of the territory in 2007.

Mordechai wrote that the bodies of two terrorists taken into Israeli custody on Friday were added to the 24 bodies being held by Israel.

'If it continues, we shall have no choice but to respond inside the Gaza Strip against terrorist targets which we understand to be behind these events, ' Brigadier General Ronen Manelis told journalists.

The United Nations Security Council was briefed on the violence in Gaza on Friday at the request of Kuwait.

An additional 49 Palestinians were injured Saturday by Israeli gunfire as Palestinians gathered near the border between Israel and the Gaza Strip as part of protests to demand the right of return for Palestinian refugees.

"Israeli soldiers did what was necessary". Thousands of Gazans attended funerals for those killed on Friday, as well.

Israel has warned that it will not allow the border to be breached.

Israeli Prime Minister Benjamin Netanyahu has praised soldiers for allowing the rest of the country to celebrate the Passover holiday safely. Yoav Mordechai posted on the IDF's Arabic Facebook page on Sunday.

Israel is undoubtedly very concerned about any large-scale final march toward the border, let alone one that may have followed numerous cycles of violence in Gaza. Palestinians identified him as Abd el-Fattah Abd el-Nabi, 18, and said he died as a result of the shooting.

Protest organizers have said mass marches would continue until May 15, the 70th anniversary of Israel's creation.

Hamas said Saturday that four of the 15 dead were members of its military wing. According to the Palestinian Authority's official news agency Wafa, two Palestinians were shot in the leg by IDF soldiers on the other side of the fence.

The EU is the biggest donor to the Palestinians and has spoken out against US President Donald Trump's Jerusalem decision.

Israel had deployed troop reinforcements along the border, including more than 100 special forces snipers, saying it would prevent attempts to break through the fence.

As such, the Great Return March represents a new beginning that heralds a new phase of the Palestinian struggle, one that could gain the support of everyone and that could become the cornerstone in the process of reconciliation to which the Palestinian people long.